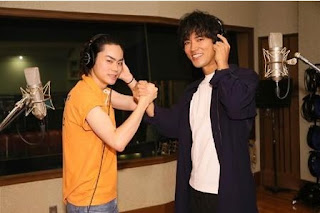 Suda Masaki and Kiritani Kenta will be singing the theme song for their movie "Hibana" which will be shown in cinemas from 23 November. The song "Asakusa Kid" was originally written and sung by Beat Takeshi in 1986 so the duo will be doing a cover version which will be featured at the end of the movie.


The film which is based on the 153th Akutagawa Award-winning same-titled novel by comedian duo Peace's Matayoshi Naoki, is directed by Itao Itsuji. The story describes how Tokunaga (Suda), a struggling comedian meets his senior Kamiya (Kiritani) who has a strong belief in what he does and tries to overcome the gap between his ideals, talent and reality. Kimura Fumio plays Kamiya's girlfriend Maki.

Suda said that he was very excited to be singing the song with Kiritani which was evident during their recording session which had taken place in late August some time after the filming of the movie was wrapped up. In particular, he liked the phrase "itsuka ureru to shinjiteta" (I believed that I would make it big one day) which would be applicable not just to comedians but any celebrity in showbiz. As such, he hoped that the audience will look forward to hearing their song during the ending credits. As for Kiritani, he said that being able to sing Beat Takeshi's famous song made him really happy especially since both Suda and he are from Kansai and got to sing the song of a top Tokyo comedian. He also recalled how enjoyable it was to be able to sing this with Suda during the recording session and hopes that the audience will be happy after listening to it.

Sources: Sanspo / Yomiuri Hochi / Eiga.com
Posted by Chiaki at 12:14 AM