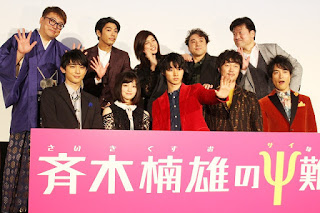 
The film is based on the same-titled popular manga by Aso Shuichi and features Yamazaki in the role of a senior high school student named Saiki Kusuo who possesses strong supernatural powers that constantly gets him into trouble. With the annual cultural festival coming up soon, Kusuo hopes that he would be able to get through it peacefully but gets embroiled into a huge mess by his strange classmates like Teruhashi Kokomi (Hashimoto) who has a wild imagination. With regard to Yamazaki's first attempt at comedy, the director Fukuda praised him for being a great comedian and feels that he has potential in this area. As such, Fukuda expressed his wish to work with Yamazaki again in future.

In the movie, as Kusuo's retorts to the things happening around him are supposed to be internal and not showing on his face, Yamazaki said that he had a hard time trying to hold back his laughter when faced with his co-stars' funny actions and there were times when he had NGs because he couldn't tolerate it. There was once when Kaku was bent on making Yamazaki laugh even though the latter wasn't supposed to and gave in at the end. Nonetheless, the director revealed that he "allowed" Kusuo to laugh twice in the movie which the audience should be looking out for.

As for Yoshizawa who plays Kaidou Shun, a delusional guy believing that the world is ruled by an evil organisation Shikkoku no Tsubasa, he commented that he had a lot of fun during the filming and proclaimed this to become his best role to date. The director also echoed his view and revealed that when Yoshizawa was filming the movie "Gintama" with him, he was so nervous on the set. However, when it came to this movie, he was able to let go of his reservations and enjoy the filming so well that his co-stars couldn't stop laughing when they acted with him.

Muro took the lead in asking his co-stars to come together for small group photos starting off with Hashimoto and Uchida who were asked to stand in the middle of the stage and had their photos taken by the media. Following this, Muro asked the three hearthrobs i.e. Yamazaki, Yoshizawa and Kaku to stand together for a photo which led the ladies in the audience squeal with delight. However, when Muro asked Arai, Kasahara and the director to join him for a group photo, Sato poked fun at him by saying that nobody would be interested in their photo.