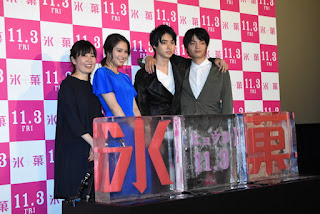 The completion screening event of new movie "Hyouka" was held at TOHO Cinemas Shinjuku on 11 October which was attended by the director Asato Mari and cast members Yamazaki Kento, Hirose Arisu and Okayama Amane. The movie will be released in cinemas from 3 November.


The film is based on the same-titled debut novel by mystery writer Yonezawa Honobu that sold more than 2.5 million copies and had been made into a manga and TV anime series previously. This is the third time that Yamazaki and Hirose are working together. Yamazaki plays the role of Oreki Houtarou who is a Year 1 senior high school student and lives by the mantra of "If I don't have to do something, I won't, but if I have to, I'll do it quickly" so as to "save energy". At the order of his elder sister, he joins the classic literature club in school so as to prevent it from being shut down. While there, he meets Chitanda Eru (Hirose) who comes from a family of wealthy farmers and is energetic and inquisitive about everything and they set up a newly-reformed classic literature along with Fukube Satoshi and Ibara Mayaka, who are Houtarou's friends since junior high. The four of them then try to unravel the truth behind "Hyouka" which is a compilation of classic literature published 33 years and their school festival which has a long-running history.

Yamazaki and Okayama who are close friends and hang out together in private, revealed how they were quite uncomfortable at first when they met on the set since they weren't sure how to behave in front of each other at work. Hirose then complained that the two of them were always in a world of their own without inviting her or anyone else along when they went to a yakiniku restaurant to practise their lines and they always sat together whenever they were on the bus to go for location shooting. As such, she felt as if they were the same person in their previous lives thus making them inseparable now.

Okayama also related an episode in the past when Yamazaki kept him waiting for about 2 hours and wanted to know what he had been doing during that time. Yamazaki pondered for a while as he couldn't remember this and only realised what Okayama was referring to when the latter said that Yamazaki kept saying that he was about to reach. Yamazaki then explained that he had been taking too much time at time preparing to go out and gave Okayama the excuse that he was in a taxi which was caught in a traffic jam.

Hirose was asked by Yamazaki if she felt that she was still capable of playing a senior high school student. She revealed that just before she was about to film "Hyouka", she was actually playing a cabaret hostess in "Shinjuku Swan 2" so she had reservations about how she would look in a school uniform. However, the good thing was that there was someone in showbiz who looks like her, is slightly shorter than her and very suitable for the student look (referring to her sister Suzu) so she managed to convince herself in the end that she should look fine as a high school student despite being 22 years old.