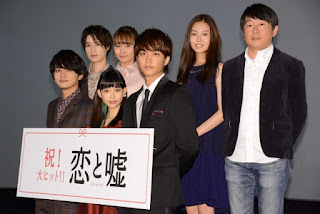 The first-day-screening event of new movie "Koi to Uso" was held at TOHO Cinemas Shinjuku on 14 October which was attended by the director Furusawa Takeshi, cast members Morikawa Aoi, Kitamura Takumi, Sato Kanta, Asakawa Nana, Tanabe Momoko and Sakamoto Shogo who sings the theme song. The movie is based on the same-titled manga by Musao which is currently serialised in manga mobile app "Manga Box" and describes how the heroine Nisawa Aoi lives in a world where there is no freedom to love. In this era where the Japanese government collects and analyses the genetic information of its citizens, it decides the best marriage partner for everyone based on their genetic traits so as to reverse the tide on its shrinking population. However, the heroine is faced with the ultimate dilemma of choosing between two men i.e. her childhood friend Shiba Yuuto (Kitamura) who has been holding a torch for her and Takachiho Sosuke (Sato) who is chosen as her best marriage partner by the government.

Although the cast admitted that three of the five of them are very shy in front of strangers, the mood on the set was very jovial thanks to Sato for being the moodmaker. However, Morikawa revealed that Sato actually has a poor memory because he kept telling people that his favourite scene was that at the aquarium with Morikawa. The truth was that he didn't even remember when it was shot which led Morikawa to lament that the kissing scene there was an important development for their characters. In defense, Sato said that he tended not to check the filming schedule of the scenes for each day so that was why he didn't realise his blunder.

When asked about how they would feel if they received a notice from the government about their future marriage partner, Morikawa was asked for her answer first but Kitamura butted in with the answer that he thought that it was a great idea. This led everyone to laugh at this unexpected interruption to which Kitamura said that he didn't hear properly. Morikawa then said that since the chances of meeting one's destined party were rather low, she thought that it wasn't a bad idea to find out what kind of person would suit her. However, getting the notice at the age of 16 was too early in her opinion although she could understand the rationale of doing so since teenagers would probably not have known what it meant to love someone and are more likely to accept the directive as compared to when they become adults. Asakawa also echoed her view and added that if there wasn't a notification from the government, she would most likely be unable to get married since she couldn't find a marriage partner on her own.

At the end of the event, Sato asked the audience to spread the word around about this movie which is a heartwarming and happy story. Kitamura hoped that the movie will convey the beauty and happiness of being able to choose your own happiness despite the troubles it may bring while Morikawa asked everyone to stay till the ending credits finish so as to hear the theme song.