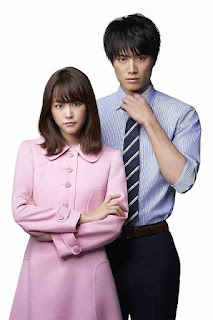 The supporting cast line-up of new movie "Revenge Girl" starring Kiritani Mirei had been announced. The movie is based on the novel written by Kiyo Tomohide and Yoshida Erika which will be published this autumn. Kiritani plays the lead character Takaraishi Miki who is a 24-year-old OL. She graduated as the top student from University of Tokyo and had also won the Miss Campus title thus making her appear as the "perfect" girl with brains and looks. However, her biggest flaw is her ugly personality which she doesn't realise. One day, her boyfriend who aspires to become a politician dumps her thus leading to Miki resolve to become a politician and the Prime Minister one day so as to get back at him.


Suzuki Nobuyuki will play Kadowaki Shunya who is Miki's election advisor. The two of them hate each other's guts from the start but he gradually takes a liking to her after seeing how hard she works to become a politician. Kiyohara Sho will play Saito Hiromasa who used to be Miki's boyfriend and comes from a family of politicians while Baba Fumika plays Nakategawa Mariko, a model and gravure idol who helps Miki in her election campaign so as to increase exposure for herself. Satsukawa Aimi will play Momose Rinko who is in love with Hiromasa while Hiromasa's father Shigeru will be played by Owada Shinya.

The movie will be shown in cinemas from 23 December.