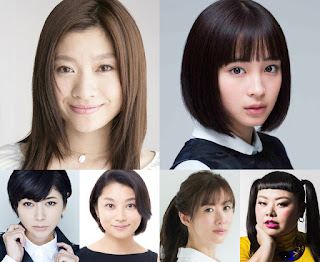 Shinohara Ryoko will be starring in the Japanese remake of 2011 Korean hit movie "Sunny" which will be directed by Ohne Hitoshi. The Japanese version titled "Sunny Tsuyoi kimochi tsuyoi ai" (Sunny Strong feelings strong love) will be shuttling between the present era and the 90s thus it will feature the signature elements of the 90s including J-pop and fashion trends then. Co-stars in this movie include Hirose Suzu, Maki Youko, Koike Eiko, Tomosaka Rie and Watanabe Naomi.


The lead character Nami (Shinohara) who is a full-time housewife, wants to reunite her buddies who formed the group "SUNNY" when they were in an all-girls senior high school after knowing that one of her best friends Serika (Maki) is down with terminal cancer. However, it has been 22 years since they last gathered so it is an uphill task trying to locate everyone. Koike will play Yuko who is the wife of a rich man while Tomosaka plays Shin who works in the sex trade and has financial difficulties. Last but not least, Watanabe will be playing Ume, the owner of a real estate business. Another key figure in their group Nana will be played by another actress which will be announced at a later date. Hirose will play the senior high school version of Naomi in this movie.

Shinohara said that although she had worked with Ohne in a TV drama back in 2001, she hoped to show her progress as an actress since then through this movie and is looking forward to this collaboration. In addition, as the story is full of nostalgia and has been adapted to accommodate Japanese elements from the 90s, she is excited about the impending filming. On the other hand, Hirose said that she had been a fan of the original movie and hoped to be able to participate if there ever was a remake. She also expressed her anxiety over having to play Shinohara's younger version in the movie although she was honoured to be given this role. Despite being born at the tail end of the 90s (1998), Hirose revealed that she already started studying the trends of the high school students then so as to put them into good use in the movie.

Filming will begin from early October to late November and the movie will be shown in cinemas next year.