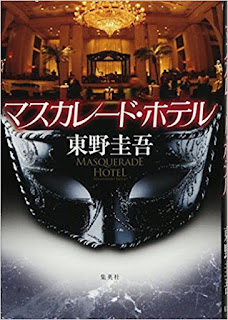 Kimura Takuya and Nagasawa Masami will be starring in the new real-life adaptation movie of "Masquerade Hotel", the first novel of a 3-part series by Higashino Keigo which has sold 2.75 million copies to date. Although talks to make the adaptation started soon after the release of the novel, it took 6 years before the plans were confirmed and the movie version will be directed by Suzuki Masayuki who has works such as "HERO" under his belt and the script will be written by Okada Michitaka who was responsible for the "Liar Game" series.


Kimura will be playing a police detective for the first time while Nagasawa will be playing a front desk clerk at a hotel. Kimura's character Nitta Kousuke is an elite detective from the first investigation unit of the Metropolitan Police Department who is tasked to investigate a series of 3 murders which happened in Tokyo. Through the clues left behind on the crime scenes, a hint points to the 4th murder which is supposedly going to take place at a hotel named Cortesia Tokyo. In order to hide his identity and expose the masquerades of the guests, Nitta poses as an employee of the hotel who is trained by Yamagishi Naomi (Nagasawa). Nitta's priority is to catch the criminal while Yamada cares more for the safety of the guests thus the two of them will clash with each other repeatedly.

Kimura commented that it is interesting to play both a police detective and hotel employee at the same time in a movie and said that he has managed to keep his posture right thanks to the smart-looking hotel employee uniform. As for working with Nagasawa, he praised her for being expressive and said that he is looking forward to seeing how they can make the interesting novel appealing to the audience through the movie.

On the other hand, Nagasawa said that after reading the original novel, she was excited and impressed by how the police detective and hotel employee took pride in their work and were totally devoted in what they had to do. She expressed joy in being able to play a character like Yamada and working with Kimura for the first time.

Filming will take place from 7 October to mid November and the movie will be released in cinemas in 2019.