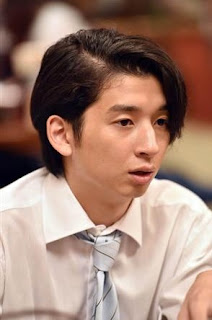 Ogata Atsushi who is the grandson of the late Ogata Ken and son of Ogata Naoto and Sendo Nobuko, will be making his debut in the TBS Autumn 2017 drama "Rikuou" starring Yakusho Koji. He will be playing the role of Hiroki who is the classmate of Daichi (Yamazaki Kento) and understands the latter's struggles with finding a job and resisting his destiny as the heir of a longtime socks manufacturer. Despite having difficulties with his job search as well, Hiroki lends a listening ear to Daichi.


Atsushi said that he is very honoured and happy to be able to make his debut in this wonderful drama and will try his best to handle each scene. Although he had been used to seeing his grandfather and parents as well-known actors since he was young, he recalled that he was extremely excited when he saw how passionate his father had played a reporter in the 2011 TBS drama "Nankyoku Tairiku". Similarly, his grandfather who was usually gentle to him, changed completely and immersed himself into the role of a murderer in the 1979 movie "Fukushuusuru wa wa ni ari" which made him feel so overwhelmed and impressed that he started to study acting. Atsushi was thankful for the environment they had provided for him and hoped to work hard as an actor in the future with dreams of appearing in a Taiga drama or going to Hollywood. He also revealed that his father had said that it was good that he got this opportunity while his mother was extremely happy about it.

Atsushi went to the US to attend senior high school and had qualified for an university there but decided to become an actor thus returned to Japan. Last year, he went for an audition conducted by Stardust Promotion and passed it which allowed him to attend acting lessons for a year. Coincidentally, Atsushi is making his debut at the age of 21 just like his father.