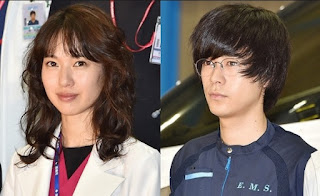 Toda Erika and Narita Ryo are said to be dating as reported on 11 October. According to media reports, the couple got to know each other while working on the FujiTV Summer 2017 drama "Code Blue THE THIRD SEASON" and started dating soon after the filming began in June. Toda was also said to have been in Narita's car when he got into an accident on 8 October thus leading to the revelation of their relationship.


Toda made her debut in 2000 through the NHK morning drama "Oodorii" and became known for her works such as the "SPEC" series and "Death Note". On the other hand, Narita who is 5 years younger than Toda, made his debut as a model in 2013 for "Men's NON-NO" before becoming an actor in the following year. He had appeared in dramas such as "Nigeru wa haji daga yaku ni tatsu" and movies like "Kiseki - Ano hi no sobito -". The two of them are going to work together again for the movie version of "Code Blue" which begins its filming from November this year.