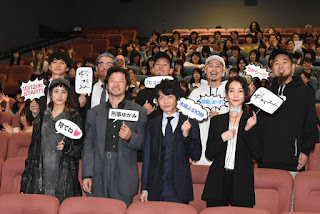 The completion screening event and press conference of FujiTV Autumn 2017 drama "Keiji Yugami" was held on 10 October which was attended by cast members Asano Tadanobu, Kamiki Ryuunosuke, Inamori Izumi, Yamamoto Mizuki, Hashimoto Atsushi, Nishina Takashi and WANIMA who is singing the theme song for the drama. The drama begins its run from 12 October in the Thursdays 10pm timeslot.


The drama is based on the same-titled manga by Iura Hideo and features Asano as Yugami Yukimasa who is a talented police detective but will stop at nothing to solve his cases even if the methods may be somewhat illegal. He has a keen eye for details which allows him to see through the suspects. Kamiki plays the newbie detective Hanyu Torao who has a strong sense of justice, has a no-nonsense character and graduated with top grades in school. The two of them who are extreme opposites, form an unlikely alliance to solve various cases where each episode will feature a different case.

When asked to describe his character, Asano said that Yugami is one who is a genius at investigation work but would be less enthusiastic and diligent about other things. However, he was still figuring his way out as to how to play his character and even revealed that he was wondering all the time how to read his character's first name even during interviews. Although the actual reading was Yukimasa, the words had an alternative reading "tekitou" which means not serious and irresponsible that coincides with Yugami's character traits.

As for Kamiki, he said that this was the first time that he got a "proper job" in his works and got to wear a suit for work as compared to his past roles when the only time he wore a suit was when he played a student going for interviews. In addition, since this is the first time he is playing a police detective, he said that it was tougher than he thought because the lines had a lot of legal jargon which he wasn't used to. Upon hearing this, Asano commented jokingly that he was thankful for Kamiki's presence and asked for his appearance time to be reduced so that Kamiki could do all the hard work. Asano then went on to say that he didn't need to do action scenes or speak difficult lines which led Kamiki to say that he wanted Yugami (Asano) to get more running scenes.

In the drama, Inamori gets to show her sadistic side as the capable female detective Kanno Rika and would kick her subordinate Yugami at times while wearing high heels. She was asked to replicate the kicking scene on stage which made Asano exclaim that it hurt a lot more than when they were filming. In response to this, Inamori said that she got better and stronger at kicking after the "practice" she got while filming.

Yamamoto who plays a hacker Hizumi in this drama, said that her impression of Asano was that he looked frightening but after actually meeting him, she was happy and surprised to find that he was very approachable. Upon hearing this, Asano said that they had a filming with child actors the day before and asked one of the girls why she was staring at him. She then answered that he looked like a suspicious bad guy which made Asano realise that how frightening he must have looked to them.