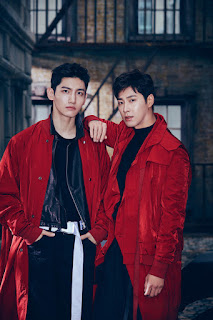 Tohoshinki will be singing the theme song for FujiTV Autumn 2017 drama "Ashita no Yakusoku" starring Inoue Mao which will begin its run from 17 October in the Tuesdays 9pm timeslot. The song titled "Reboot" will be the duo's first single in two-and-a-half years since they entered military service and were discharged in April (Yunho) and August (Changmin) this year. The dance number is also meant to be a sign of Tohoshinki's return. The release date of the song is yet to be decided.


Changmin commented that they were very happy when they got the offer to sing the theme song. On the other hand, Yunho said that the song meant a lot to them since it marks their return and the heavy beats of the song matches the drama very well. The duo will be embarking on their 3rd nationwide 5 domes concert tour from November this year.