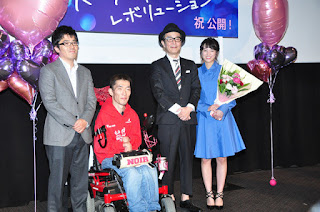 The first-day-screening event of new movie "Perfect Revolution" was held at TOHO Cinemas Shinjuku on 29 September which was attended by the director Matsumoto Junpei, activist Kumashino Yoshihiko and cast members Lily Franky and Seino Nana. The movie which is based on the true story of Kumashino who suffers from cerebral palsy and is an activist on the understanding of sexual issues involving the handicapped.


Lily plays the lead character Kuma who is an activist campaigning for those like him as the handicapped also have sexual needs and the desire to be in love. He meets Mitsu (Seino Nana), a pink-haired prostitute who has a sociopathic personality disorder and the two of them fall in love with each other unexpectedly. Co-stars include Koike Eiko, Okayama Amane and Yo Kimiko.

As Matsumoto had been planning for this movie with Kumashino since 5 years ago, Lily who was Kumashino's longtime friend commented that to see the movie being finally released, he was filled with indescribable emotions. However, he was not expecting such a grand opening even though they had all been anticipating the release of the movie back when they were filming it.

Lily then went on to praise Seino's acting in the movie and her ongoing TV Asahi drama "Totto-chan" and expressed his joy at seeing her appear in CMs too. Seino then revealed that she and Lily had got on very well and even used the same mouthwash and chewed gum before filming their intimate scenes. In response to this, Matsumoto said that the two of them were very close and kept singing or doing CM impersonations during their breaks which made it difficult for him to direct because he felt like he was kept out of their world.

As Seino would be celebrating her 23rd birthday on 14 October, the guys gave her a bouquet of flowers in advance and Lily wished for her to be able to get many acting awards for her performance in this movie.