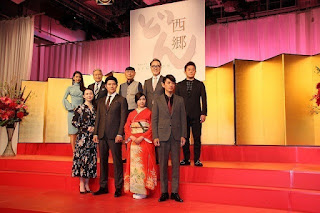 NHK held a press conference on 3 October to announce a new batch of supporting cast members for its upcoming NHK Taiga drama "Segodon" starring Suzuki Ryohei which will begin its run from 7 January 2018. The drama features the lifetime of Saigo Takamori (Suzuki) who was regarded as a hero in the Meiji Restoration era and experienced two banishments to islands and three marriages during his lifetime. He was credited for his part in overthrowing the Tokugawa Bakufu and realising the Meiji Restoration while his last days were spent fighting the new Meiji government.


The list of new members in the cast include:

Itoida Jun - Katsura Hisatake, the younger brother of Akayama Yukie and had supported Saigo throughout his lifetime.

Tanaka Michiko - Tama, the daughter of a farmer's family which had left the Satsuma domain

Fujiki Naohito - Abe Masahiro, the top elder of the Bingo Fukuyama feudal lord who had great analytical powers to read the political trends

Matayoshi Naoki - Tokugawa Iesada who was the 13th Edo Shogun

It will be interesting if they make Okubo as the "bad guy" here as he will be played by Eita. His Tatewaki was too weak in Atsu Hime, but I know that it typical for taiga that the main character will always be a kindhearted and peace loving. I wonder how I'll feel watching Eita as Okubo interacts with Tatewaki character, after 50 eps watched him as Tatewaki in Atsu Hime.