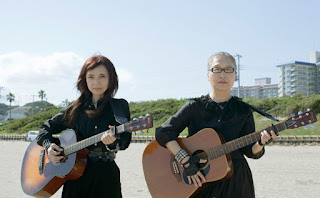 Yamasaki Hako and Motai Masako will be forming the unit Hako & Mako to sing the theme song for new WOWOW & Hulu drama "Cote d'Azur No.10" starring Kobayashi Satomi and Oshima Yuko which will begin its run from 19 November and 28 November respectively on the two platforms. The song titled "Kibun wo kaete" (Change your feeling) is Yamasaki's song which was written by herself and released in 1975 and the new version was re-arranged by Kaneko Takahiro. Motai will be appearing in the 4th episode in the Hulu version of this drama.


Yamasaki revealed that she was surprised and happy by the offer as she has been singing this song since her debut. She also commented that the new arrangement is very cool and their unit name feels like one from a punk band. As for Motai, she said that when she first heard the song, she was struck by how suitable it was for this era and was even more surprised when she heard that Yamasaki had written this song when she was just 17. Although she was sad about the recording session being over too quickly, she really enjoyed the shooting session with Yamasaki at the beach and felt like her spirits were lifted just like the song's message.

Hako Yamasaki --- folk legend. Her 1975 debut album Tobimasu is an absolute classic. People who don't know her work owe it to themselves to check it out.