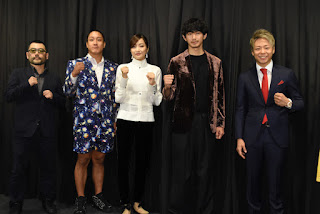 The first-day-screening event of new movie "Ringside Story" was held at Shinjuku Musashinokan on 14 october which was attended by the director Take Masaharu and cast members Sato Eriko, Eita, Takeru and Kuroshio Jiro. The movie features Sato as Enoshima Kanako who is living with her boyfriend of 10 years Murakami Hideo (Eita), a struggling actor. When she gets fired from the bento factory she works at, she becomes a staff member in the professional wrestling group WRESTLE-1 and becomes deeply drawn to the sport. On the other hand, Hideo who is literally sponging off Kanako, misunderstands that she is seeing someone else when Kanako gets too engrossed in her new job and he causes a very serious incident as a result of his jealousy.


Sato who makes her return to work through this movie after giving birth, said that she was very eager to act in this movie especially since it talks about various things which actors can identify with. Eita also echoed her view since there was a time when he was so poor as an actor because he couldn't get any work and could only buy cabbage from the 100-yen shops. As such, when he thought about those tough days, he was very keen to get this role during the audition and return to his roots as an actor to challenge himself.

As the film was also featured during the 22nd Busan International Film Festival, Sato, Eita and the director went there for 2 days and 1 night to participate in the screening. In the movie, there was a scene saying that Hideo vowed to bring Kanako to the red carpet of the Cannes Film Festival so it felt like the same when they were walking on the red carpet of the Busan festival. Eita also said that they were overwhelmed by the enthusiasm and love for films from the audience there during the screening.