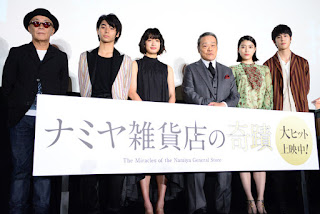 The first-day-screening event of new movie "Namiya Zakkaten no Kiseki" was held at Marunouchi Picadilly on 23 September which was attended by the director Hiroki Ryuichi and cast members Yamada Ryosuke, Nishida Toshiyuki, Murakami Nijirou, Kanichiro, Narumi Riko and Kadowaki Mugi.

The movie which is based on the same-titled novel by Higashino Keigo that had sold more than 6.5 million copies, is set in modern Japan in the year 2012. Yamada plays the lead character Atsuya who grew up at an orphanage. After doing some evil deeds with his childhood friends Shota and Kohei, he hides at an abandoned house which used to be a general store named Namiya that was known for being a place where people could come to seek advice for their troubles. While at the house, Atsuya finds a letter written by someone 32 years ago in 1980 asking for advice on a problem in the post box and starts to interact with this person through mail on the behalf of the store's owner Namiya Yuji (Nishida). Gradually, the secret behind the store is unravelled through the mail correspondence.

When asked about memorable incidents during the filming, the director Hiroki said that while shooting the running scenes for Yamada, Murakami and Kanichiro, he "complained" that the trio were running too quickly until the camera couldn't catch up with them. In response, Murakami commented that it was Yamada who didn't hold back while Yamada said that he couldn't possibly hold back while running. However, Kanichiro admitted that he was running too much until his abdomen hurt at the end. As for their relationship on the set, Murakami said that they were like three brothers with Yamada being the eldest and Kanichiro being the youngest.

In line with the theme of the movie, the cast were asked about their past experiences with regard to letters. Yamada revealed that he had buried a time capsule with his childhood friend when he just entered Johnny's Jimusho and they recently recovered that time capsule which contained a letter to himself after he turned 20. In the letter, he wrote that he wanted to make his debut and hold a concert in Tokyo Dome as well as buy a white house for his family. Yamada said that he already realised the first two dreams but he has yet to buy the house. In addition, the trading cards that he used to be obsessed with as a child had become worn out thus reflecting how much time had passed them. As for Kadowaki, she revealed that her mother used to leave letters for her to communicate as she was always busy. As such, when she reread the letters from that period in the morning before the event, a lot of past memories came flooding back.

At the end of the event, Nishida read aloud a letter he had written for Yamada which showed his consideration for the latter who was juggling his careers as an actor and idol which could sometimes mean that people saw him with prejudice. However, Nishida was convinced that Yamada could erase such reservations about him with his acting in this movie and asked him to be proud of what he had achieved. Upon hearing the contents, Yamada was close to tears and bowed deeply to Nishida for understanding him so well and taking the effort to write such a letter for him. Nishida then commented that he likes Yamada a lot and handed his letter to him as a keepsake.