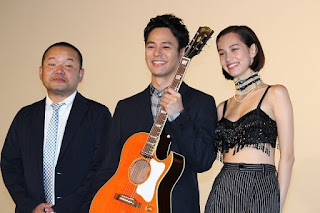 The first-day-screening event of new movie "Okuda Tamio ni naritai Boy to Deau otoko subete kuruwaseru Girl" was held at TOHO Cinemas Roppongi Hills on 16 September which was attended by the director Ohne Hitoshi and cast members Tsumabuki Satoshi and Mizuhara Kiko. The film is based on the same-titled manga by Shibuya Chokkaku which was serialised in "Shukan SPA!". Tsumabuki plays the role of a magazine Kooroki Yuuji who aspires to live like singer-songwriter Okuda Tamio while Mizuhara plays Amami Akari who works at an apparel maker's promotions department. After Kooroki falls in love with Akari at first sight and they start dating, she starts to show the bewitching side of her and messes up the lives of the men around her.

Tsumabuki commented that it is rare to see such a straightforward love comedy like their movie so he was confident that viewers will be entertained by this film. He went on to praise Mizuhara for being a positive-minded girl who is able to make people around her happy even if they may be feeling down. Mizuhara then complimented her co-star for being a sweet boy as he was always very considerate towards her like an elder brother and had a cute appearance like a puppy.

In line with the movie's theme and to reward Tsumabuki for spending a lot of effort on this movie from the planning stage, there were a number of surprises lined up for him so as to "drive him crazy". First of all, Mizuhara presented a bouquet of flowers to Tsumabuki which was designed to fit his clean and gentle image and thank him for doing a lot for this movie that she believed the movie will do well in the box office. Ohne then suggested that a handshake from Mizuhara was not enough so the two actors hugged on stage with a big smile. It was then revealed that there was a present from Okuda Tamio himself where Tsumabuki was presented with a guitar signed by the singer which made him so excited and confused as to whether it was true. When he held the guitar, Tsumabuki said that he was so surprised and happy about this gift and will display it at home because he thinks that it will be a pity to play it. The director then suggested jokingly that he should sign on the guitar as well which led Tsumabuki to protest and said that he didn't need Ohne's signature on it.