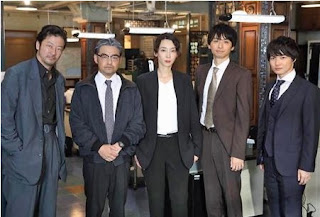 The supporting cast line-up of new FujiTV Autumn 2017 drama "Keiji Yugami" starring Asano Tadanobu and Kamiki Ryuunosuke had been announced. The drama which begins its run from 12 October in the Thursdays 10pm timeslot, is based on the same-titled manga by Iura Hideo and features Asano as Yugami Yukimasa who is a talented police detective but will stop at nothing to solve his cases even if the methods may be somewhat illegal. He has a keen eye for details which allows him to see through the suspects. Kamiki plays the newbie detective Hanyu Torao who has a strong sense of justice, has a no-nonsense character and graduated with top grades in school. The two of them who are extreme opposites, form an unlikely alliance to solve various cases where each episode will feature a different case.

Inamori Izumi will be playing the role of Kanno Rika who is the section chief of the team which Yugami and Hanyu are in and has managed to become successful in her career despite being a woman as compared to Yugami who entered the police force at the same time as her. Kanno gets irritated at Yugami who keeps doing things his way but will always protect her subordinates from her superiors when the need arises. Inamori commented that this is the first time she is playing a police detective and has to talk like a man so she finds it very interesting and meaningful to take on this challenge. She also joked that she is looking forward to kicking Asano from behind with her high heels as Kanno always does this when Yugami gets on her nerves.