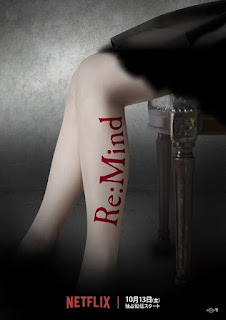 Hiragana Keyakizaka46, the under group of popular idol group Keyakizaka46, will be the leads in the new TV Tokyo Autumn 2017 drama "Re:Mind" which will begin its run from 19 October in the Thursdays 1am timeslot. The drama will also be shown via Netflix from 13 October where new episodes are uploaded on every Friday while BS Japan will show this from 24 October in the Tuesdays 11pm timeslot.

The story which is conceptualised by Akimoto Yasushi, is a suspense tale set in a senior school where the classmates are trapped in a certain place before they realise it. When they regain consciousness, they find that they are seated around a huge table and are greeted with some strange happenings. Since there is a reason why the girls cannot escape from the room, they are plunged into fear and confusion and try to make sense of what has happened as they try to escape amid various horrifying things heading their way.

Nagahama Neru who is in both Keyakizaka46 groups, commented that she was shocked to hear everyone in their group will be the lead in this drama. Although she is worried about taking on the leading role, she is also filled with anticipation as she loves suspense stories. As everyone is grateful to be given the chance to act in a drama together, they will work hard to make this a success. Meanwhile, fellow member Kakizaki Memi said that as their group has a bright and cheerful image, the members were all very surprised to be acting in a serious suspense drama like this. Last but not least, Kato Shiho commented that they will not waste this chance and hope to show everyone that their members can act and their fans will react favourably to this drama.