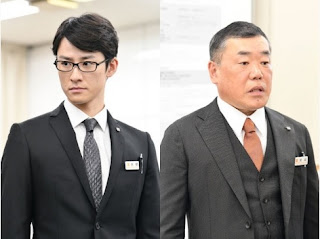 Kazama Shunsuke, Baba Tooru and Katsura Jakujaku will be appearing in the upcoming TBS Autumn 2017 drama "Rikuou" starring Yakusho Koji which will begin its run from October 2017 in the Sundays 9pm timeslot. The drama which is based on the same-titled novel by Ikeido Jun, features Yakusho as the lead character Miyazawa Koichi who is the 4th generation president of Japanese socks manufacturer Kobaseya based in Gyoda City, Saitama Prefecture, which has been in business for more than 100 years. With the decline in demand for its products, the small company which has only 20 employees, strives to rejuvenate its business by entering the field of producing running shoes which feel as if you are barefooted. However, as the industry is very competitive and the company does not have sufficient funds, Kobaseya is faced with various challenges along its journey but Miyazawa strives on with the help of the people around him as they take on the bigwigs.

Kazama will be playing Sakamoto Taro, an employee in the financing department of Saitama Chuo Bank who suggests that Kobaseya start a new business line due to dwindling demand for its socks. Regardless the size of his corporate customers, Sakamoto tries to put the interpersonal ties between people first instead of business benefits and is frank enough to speak his mind and point out the weak points in his clients' businesses. In preparation for the role, Kazama was requested to cut his hair so that they would not cover his ears. He commented that he will try his best for this drama just like how every character in the story tries their best in their respective work fields.

Baba will play Oohashi Hiroshi who is the section chief of the financing department and views Kobaseya's efforts to start a new business line unfavourable. However, when he sees how Miyazawa and his allies try to come up with the Rikuou running shoes, he is gradually won over by their enthusiasm and passion. Baba commented that Oohashi is a typical bank employee who places his prospects above everything else but he has a sense of justice deep within. As such, he hopes to explore various possibilities while playing this character and hopes that viewers will enjoy his performance.

Last but not least, Katsura will play Ienaga Tooru who is the branch manager and looks down on small and medium businesses. As such, he keeps clashing with Sakamoto over Kobaseya's new business and will try his best to obstruct their progress. This will be Katsura's first appearance in a private network drama.