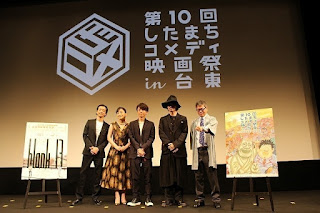 Saito Takumi's first long film as the director which is titled "blank13", was screened during the 10th Shitamachi Comedy Eigasai in Taito on 16 September as the opening movie. During the meet-the-audience session, Saito appeared along with his cast members Takahashi Issei, Kanno Misuzu and Kaneko Nobuaki at Asakusa Koukaidou. The movie which also features Lily Franky, Matsuoka Mayu and Sato Jiro, will be screened in cinemas from 3 February 2018.

The movie is based on the true story of broadcast writer Hashimoto Kouji about how a father who had gone missing for 13 years, was unable to mend ties with his estranged family. It was only until his death that his family members find out the truth about what happened during these 13 years from those who attend the father's funeral. Takahashi Issei plays the lead character Hashida Koji while Lily Franky plays Koji's missing father. Kanno Misuzu plays Koji's mother while Matsuoka Mayu plays Koji's girlfriend. Saito himself plays the eldest son of the Hashida family.

When the four actors appeared on stage, they were greeted by loud cheers with Takahashi receiving a very warm response when it was his turn to say hello. During the one-minute phototaking session, the cast waved at the audience who were free to take as many photos as they wished.

During the event, Saito revealed that the movie had entered the competition category of Vladivostok International Film Festival where he received a notification in the wee hours of the previous night that Takahashi, Franky and he had all won the best actor award for their performances in this movie. Saito commented that the Russian audience seemed to like their movie very much and wanted to give them an award even though it was rare for three people to get the same award at the same time. Saito joked that he was probably the extra among the three of them while Takahashi smiled widely as Saito talked about this piece of good news.

Saito also recalled how they announced the making of this movie in the previous year's edition of this film festival so he was especially touched to be able to return to the same place for the screening. He also revealed how he had made seemingly ridiculous to Kaneko who was tasked to make the music for the movie which led the latter to comment that he even had to make trance music using the mokugyo i.e. the wooden gong used by monks in Buddhist temples.