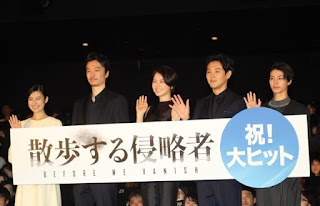 The first-day-screening event of new movie "Sanposuru Shinryakusha" was held at Shinjuku Picadilly on 9 September which was attended by the director Kurosawa Kiyoshi and cast members Nagasawa Masami, Matsuda Ryuhei, Hasegawa Hiroki, Takasugi Mahiro and Tsunematsu Yuri. The movie is adapted by Kurosawa from the same-titled 2015 stage play from theatre group Ikiume. Matsuda plays the role of Kase Shinji who has the habit of going on daily walks every evening but disappears without a trace for a few days. When he returns home, it is as if he has become an entirely different person which makes his wife Narumi (Nagasawa) shocked at his changes especially when he becomes very gentle and nice to her. Suddenly, Shinji tells Narumi that there will be an attack on Earth which is then followed by a series of strange happenings such as the mass killing of a family in the town they live in and the happening of weird events that disrupts the peaceful life they once had. Hasegawa Hiroki plays the role of a journalist Sakurai who follows the "invader" around as part of his job.

With regard to working with Nagasawa for the first time, Kurosawa revealed that he wasn't sure what to make of her responses whenever he gave her instructions during the filming. Most people would usually say yes or show their dislike for being told what to do but Nagasawa had a long pause before she said yes each time and her facial expressions didn't show how she felt about it so Kurosawa wasn't sure what to make of it. In response, Nagasawa said that the pause was because she was thinking about and digesting what had been said to her.

As for Matsuda, Kurosawa revealed that when he first met the actor, he didn't give very specific instructions on how to play an alien and that there were no specific characteristics in the role. When he asked Matsuda if he was OK and knew what to do, the latter simply smiled and replied in the affirmative. It turned out that Matsuda did a brilliant job in playing his character so Kurosawa was very satisfied with his performance.

Hasegawa who admitted to being a big fan of Kurosawa, said that he talked to the director a lot about his past works to the extent that he worried if Kurosawa found him to be a nuisance. The director said that it was rare for him to engage in casual talk on the filming set because he usually has a lot to think about during the filming which led Hasegawa to apologise for being an over-zealous fan.

The movie will be taking part in the 22nd Busan International Film Festival's The window of Asian movies category as announced during the event.