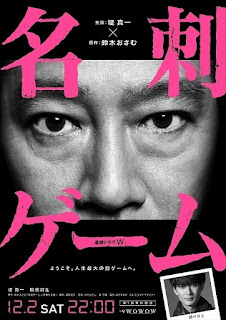 Tsutsumi Shinichi will be starring in the upcoming WOWOW drama "Meishi Game" (Namecard Game) which is based on the same-titled novel by Suzuki Osamu and marks the first leading role for Tsutsumi in a WOWOW drama. He will be working with Okada Masaki in this human suspense drama which consists of 4 episodes and will be shown from 2 December in the Saturdays 10pm timeslot.

The story is set in the TV entertainment world where Tsutsumi plays Kanda, a popular TV quiz show' producer who is so obsessed with work and uses his game show to expose the bad deeds of people. One day, Kanda loses consciousness and suddenly finds himself trapped in an underground boiler room with a collar ring around his neck when he comes to. Scattered on the floor are a huge amount of namecards while his daughter (Ootomo Karen) is tied to the wall while wearing the same collar ring as his. Just then, a mysterious man X (Okada) appears in front of Kanda and forces the latter to play a namecard card with a time limit of 2 hours. Kanda will have to search for a namecard which he received and find the owner of that namecard and return it to that person or else his or his daughter's collar ring will explode if time runs out or if he finds the wrong person. In order to save his daughter, Kanda has no choice but to participate in this game and finds that there is a huge secret behind the motive for getting him involved.

Tsutsumi said that Kanda is a typical character in the mass media industry who strives hard to survive among the competition and gradually changes as a result. As for working with Okada, Tsutsumi said that he is looking forward to the collaboration since it had been a long while since they last worked together. He revealed that Okada is one who knows how to separate work from pleasure and hopes that they will be able to have some fun during their breaks and even go drinking together.

As for Okada, he described his character X as someone who may look like a personification of extreme evil at first but will gradually change as the story progresses. As such, he hopes to put in his best effort to play this appealing character who will torment Tsutsumi's character to the fullest.