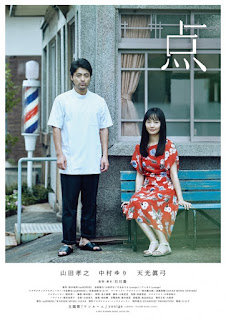 Yamada Takayuki and Nakamura Yuri will be starring in the new short film "Ten" which will be shown at Cinem@rt Shinjuku for one week only from 23 September. The theme song of the movie will be sung by girls' band yonige which is from Neyagawa, Osaka. Yamada and yonige had been interacting via SNS previously so when yonige approached him to star in their music video for their major debut single "One Room" to be released on 20 September, Yamada made a counter offer to make a short movie inspired by the song.

The story features Yamada as a barber named Takashi who owns a barber shop in a rural town and meets his childhood friend and ex-girlfriend during his senior high school days Tomoe (Nakamura). The movie shuttles between the past and present as Tomoe asks Takashi to shave her nape as her wedding ceremony is coming up. Although he is unsure how he should interact with her, Takashi still invites her into his shop.

Yamada explained that the idea to make the movie from the song came about in the autumn of 2016 and they wanted to do something different from the usual promotion video. As it took time to prepare and assemble the production team, the filming was done on 9 August this year from morning to night even though he had another movie's filming starting on the following day. Despite doing the filming in a limited time, Yamada said that the whole team worked hard to elevate the charm of yonige's song in this movie.

In conjunction with the release of the movie, there will be an event held on 25 September which will be attended by Yamada, yonige and the director Ishikawa Kei.