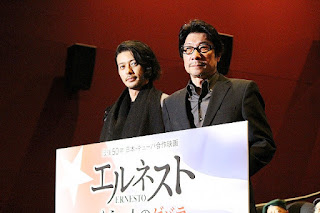 The screening event of new movie "Ernesto" jointly produced by Japan and Cuba was held at TOHO Cinemas Shinjuku on 13 September which was attended by the director Sakamoto Junji and the lead actor Odagiri Jo. The movie features Odagiri as the Bolivian-Japanese doctor Ernesto Freddy Maemura who fought alongside with revolutionist Che Guevara and died at the young age of 25. As the entire movie is in Spanish, Odagiri spent 6 months to learn the language and had to reduce his weight by 12kg for the filming. This being his 14th movie shot overseas, Odagiri revealed that he took on the role precisely because it was tough and something which he had never attempted before.

Odagiri commented that when he first heard about this movie from the director, he was very eager to take on the role and said that he wanted to step out of his comfort zone and take on a challenge since he has been an actor for 20 years. In the film industry of Japan today, he felt that making this type of movie felt like a revolution to him and he was filled with the strong desire to overcome the odds.

In preparation for the movie, Sakamoto went to see Maemura's classmates and family to gather information about the man himself and why he decided to take up arms even though he wanted to help people. He described Maemura as someone who was quiet but had strong views on what he could and could not tolerate and could interact with people who had opposing views. As such, he thought of Odagiri immediately after hearing about Maemura and approached his drinking buddy to take part in this project. While preparing for the movie, Odagiri made a lot of preparations such as learning Spanish until he was so good at it that the director felt that Odagiri had transformed into Maemura the moment when he first spoke during the filming. Although the director was inspired to learn Spanish as a result of Odagiri, he gave up halfway so couldn't understand what Odagiri was saying during the filming.

The movie will be shown in cinemas from 6 October.