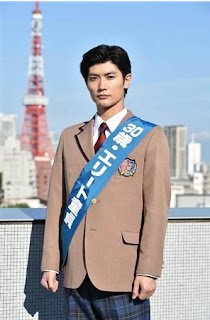 Miura Haruma will be starring in the upcoming TV Asahi Autumn 2017 drama "Otona Koukou" (Adults Senior High School) which will be shown from October in the newly set-up Saturday Night Drama timeslot i.e. Saturdays 11.05pm. This is the slot which is currently showing variety show "SmaSTATION!!" hosted by Katori Shingo that will end its run in September.

This original story is partly inspired by statistics from the Ministry of Health, Labour and Welfare in 2015 where more than 25 percent of single men in their 30s and more than 30 percent of single women are said to have no sexual experience. Miura plays a 30-year-old elite salaryman Arakawa Hideto who works at a top bank after graduating from University of Tokyo. On the surface, he has everything in life but nobody knows that he is still a virgin and has zero dating experience even though he actually craves for love and sex. As the government wants to deal with the problem of low birth rates, a new law mandates that anyone who is above the age of 30 but has no sexual experience i.e. a group of people nicknamed "Yaramiso" which literally means reaching 30 without having done it, will be sent to an adults senior high school. The sole condition to graduate from this school is that the person must have lost his or her virginity. Hideto is aghast to get sent to this high school against his will and does not even know how the government found out about his virgin status. In order to get out of this fix, Hideto has to learn about romance in this school and aim to graduate as soon as possible. However, his arrogance and pride gets in the way as he loves to look down on people, analyse people too much, show his boredom blatantly during a date which makes it look impossible for him to graduate. While learning from his fellow classmates in their 30s to 50s who are equally clumsy in love like him, Hideto experiences a renewal of his teenage years and becomes a better person as time goes by.

Miura commented that this drama is very challenging with rather racy dialogue but he thinks that the story will indeed show how the characters become adults through learning from one another's weak points. As for his character, he remarked that Hideto's pride and confidence will take a huge beating due to his posting to this adults senior high school so he hopes that the struggles he and his classmates face and how they overcome these issues will give courage and encouragement to everyone.

Filming is due to begin from September.

I am not sure that I've ever heard such a horrible premise for a show. People will probably watch hoping for sexy scenes, but it seems more like it should be a dystopian mystery show instead. I'd be more curious about how the government pries into people's personal lives and hoping that they can all escape the governmentally imposed rape.

I too find the setting of this story a bit odd because they seem to assume that having sex = having babies to solve the problem. There could be many people having short-term flings with absolutely no intention of making babies. If it had been that the condition to graduate from this school is to find a partner, it might have been more believable. However, it looks like the sex part is meant to be the comedic element as the story also wants to show the lead character's changes as a person.

Anyway, what's fiction if there isn't a far-fetched idea or two? We'll just have to close one eye to the contradictory nature of the premise. ^__^

I think I will have to close both eyes and wait until someone else tells me that it's not as terrible as I expect! This looks like a job for Chiaki! (•‿ •)