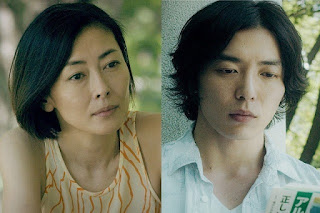 Nakayama Miho takes on her first leading role in a movie in 5 years when she appears in the upcoming film "Chou no nemuri" (The slumber of the butterfly) which will be having its world premiere at the 22nd Busan International Film Festival's gala presentation category on 12 October. The movie which is directed by Jeong Jae-eun and also stars South Korean actor Kim Jae-wook, will be released in Japan and South Korea next spring.

Nakayama plays the role of a popular female writer in her 50s named Matsumura Ryoko who comes to know that she is suffering from Alzheimer's disease. In order to achieve something in life, Ryoko becomes a lecturer at an university and comes to know a South Korean student Chan Hae in his 20s who becomes her writing assistant. Although the two of them have a huge age gap, they slowly become drawn to each other as time goes by.

Nakayama who filmed the movie in August last year, expressed her joy at the movie being finally ready for release after more than a year. She commented on her character Ryoko as a woman in her 50s who is strong but becomes fragile as time goes by. She hopes that viewers will be touched by the sad story between her and Kim's character which is accentuated by Jeong's directing.