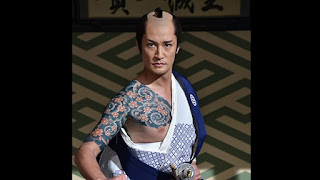 Matsuoka Masahiro will be starring in the new TBS drama SP "Mei Bugyo! Toyoma no Kinshiro" (Famous Magistrate! Kinshiro of the Toyama family) which will be shown at 8pm on 25 September. He will be playing the role of Toyama no Kin-san who was a famous hero in period dramas and known for his tattoo of a blizzard of falling cherry blossoms. During a press conference held at Toei Kyoto Studio on 27 August, Matsuoka showed off the tattoo which needed 2 to 4 hours to be drawn each time. If it was just the tattoo on the right shoulder and arm, it would need only 2 hours but if he had to show off his back, the tattoo would take 4 hours to be drawn.

Matsuoka commented that he never dreamed that he would be given the chance to play such a famous character and thought that it was a joke when he was told about the offer. He remarked that his debut in a period drama was when he was 16 and acted in the late Matsukata Hiroki's "Daichuushingura". As such, he felt that it was somewhat fated for him to be able to play Kin-san now since he had learnt a lot from Matsukata then when the latter was playing the same role. Co-stars in this SP include Inamori Izumi, Kato Masaya, Nakahara Takeo, AKB48's Watanabe Mayu, Johnny's WEST's Kamiyama Tomohiro, Hirata Mitsuru, Harada Mieko and Kitaoji Kinya.

In this era where there are not many period dramas screened on private networks, Matsuoka felt that it is a huge opportunity for them to do a 3-hr drama SP now and he hoped that this will allow the viewers to know about this interesting story especially for the younger generation who may not know Kin-san.