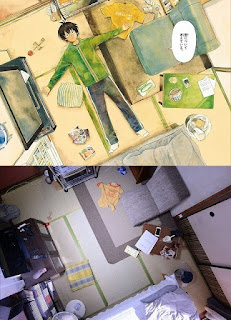 Sexy Zone's Kikuchi Fuuma will be starring in the new NTV late night drama "Wagahai no heya de aru" (This is my room) which marks his first leading role in a drama. The drama which consists of 10 episodes, is the second production in NTV's late night timeslot Shindora and will begin its run from 18 September in the Mondays 12.59am timeslot. The lyrics of the theme song "Gyutto" were written by Kikuchi and the song will be sung by Sexy Zone and released as a single on 4 October.

In this unusual drama based on the same-titled manga by Taoka Riki, Kikuchi plays the only character in the story i.e. Kagiyama Tetsuro who is a single graduate student living at a 41-year-old apartment located 5 mins from a train station somewhere in Tokyo. While being alone in his room, Tetsuro agonises and ponders over various seemingly mundane and small issues and problems in a philosophical manner such as observing how to prevent the sponge holder from falling off the wall, the reason why there is dust in his room and his observation of the people from his university's research lab who he goes for drinks with. He also thinks of the girl named Uemura from the same research lab as his from time to time.

Kikuchi said that when he received the script, he got scared at the realisation that he will have to speak so many lines on his own. However, after repeated rehearsals, he could appreciate the fun of playing this character and became more confident in his acting. As for his character, Kikuchi described Tetsuro as someone who is very ordinary but becomes too logical when he is at home. He can identify how Tetsuro thinks of the most mundane and boring things while at home which is a charm point of the latter so he will try his best to be as close to Tetsuro as possible in the drama.

Although Tetsuro will be the only "human being" in the story, a number of actors will be the "voices" of his household appliances which can't help but poke fun and make comments about his behaviour. Rakugo artist Hayashiya Kikuou will be the voice for the hippopotamus ornament beside the TV while Kaku Chikako will be the rice cooker and Mitsu Mangrove will be the lights. Last but not least, Yamadera Koichi will be the bottles in his apartment.