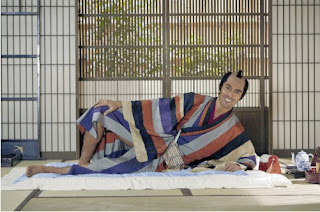 Abe Hiroshi will be starring in the new movie "Nomitori Zamurai" directed by Tsuruhashi Yasuo and filming is currently in progress in Kyoto and expected to wrap up by mid October. Co-stars include Terajima Shinobu, Toyokawa Etsushi, Saito Takumi, Kazama Morio, Ootake Shinobu, Maeda Atsuko and rakugo artist Katsura Bunshi VI who makes his appearance in a movie for the first time in 15 years since "Ashita ga arusa THE MOVIE". The movie will be shown in cinemas next year.

The comedy movie is based on the compilation of short stories by Komatsu Shigeo from which the director rearranged the story and wrote the script. The original meaning of "nomitori" was the business of removing fleas from cats which did exist during the Edo era but the movie will change this to a double-meaning word where a nomitori's work at night is to "deliver love to women on the floor". Abe plays the elite samurai Kobayashi Hironoshin who becomes a nomitori against his will because he offends the feudal lord and gets ordered to remove fleas from cats as his official day job. Despite having lost his residence, he is helped by the people living at the tenement house. When he meets a woman Omine (Terajima) who looks exactly like his dead wife Chizuru, she becomes his first partner in the nomitori trade but is scolded by her for being lousy in bed. Just when he is in low spirits after this unexpected blow, Hironoshin meets Seibei (Toyokawa) who fears his wife but is honest about his sexual desires. Hironoshin then learns techniques of how to please a woman from Seibei and becomes so good at it.