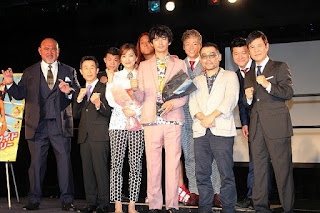 The completion screening event of new movie "Ringside Story" was held at Shinjuku FACE on 6 September which was attended by the director Take Masaharu and cast members Eita, Sato Eriko, Arizono Yoshiki, Takeru and Kuroshio Ikemen Jiro. Guest stars who made surprise appearances included the Kameda brothers i.e. Kameda Kouki and Kameda Daiki as well as Mutou Keiji who also acted in this movie. The film will be shown in cinemas from 14 October.

The movie features Sato as Enoshima Kanako who is living with her boyfriend of 10 years Murakami Hideo (Eita), a struggling actor. When she gets fired from the bento factory she works at, she becomes a staff member in the professional wrestling group WRESTLE-1 and becomes deeply drawn to the sport. On the other hand, Hideo who is literally sponging off Kanako, misunderstands that she is seeing someone else when Kanako gets too engrossed in her new job and he causes a very serious incident as a result of his jealousy.

Eita described his character Hideo as being more than a lousy man living off his woman and tried to show his daring and pure sides through his acting even though the people around him don't see him in the same way. As current K-1 champion Takeru is making his acting debut in this movie, he said that it was a fulfilling experience since he has been interested in acting and learnt a lot through the director. In response, co-stars Sato and Eita praised Takeru for his natural acting skills and Eita even said that he might win the newcomer's award with this movie. Upon hearing this, Takeru asked them to stop as he was feeling embarrassed by the compliments. In response, Takeru suggested that Eita can come to fight in the K-1 championships since he found the latter to have potential when they were training at his gym. However, Eita said that he couldn't handle the fighting and thanked Takeru for thinking so highly of him.