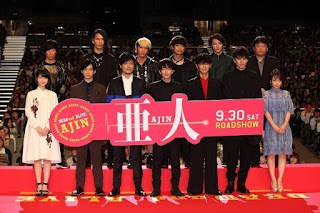 The completion screening event of new movie "Ajin" was held at Tokyo International Forum on 4 September which was attended by the director Motohiro Katsuyuki, THE ORAL CIGARETTES which sings the theme song as well as cast members Sato Takeru, Ayano Go, Tamayama Tetsuji, Shirota Yu, Chiba Yuudai, Kawaei Rina, Yamada Yuki and Hamabe Minami. About 4,000 people came for the event. The movie will be screened in cinemas from 30 September.

"Ajin" was first seralised in the manga magazine "good! Afternoon" from 2012 and has released 9 volumes to date which has accumulated sales of more than 5.4 million copies. The anime movie version was screened in November 2015 while the TV anime series was shown from January 2016. The title "Ajin" refers to a group of people who look like ordinary humans but will not die even if they sustain life-threatening injuries.

In the real-life movie version, Sato plays Nagai Kei who is a 26-year-old medical intern although the manga's setting is that Kei is a 17-year-old senior high school student. One day, he gets knocked down by a truck but is shocked to see his body recovering instantaneously on its own which makes him realise that he is an Ajin. As a result, Kei is kept under custody at the Ajin Research Institute where he is subjected to inhumane tests by the researchers. Just then, a Ajin terrorist Sato (Ayano Go) comes to rescue Kei but this is actually with the intention of getting Kei to join him in a mass massacre to take revenge against the non-Ajins. Kei then has to fight Sato and his accomplices even though he is the weakest Ajin who has yet to master how to control his power and IBM well.

Sato appeared on the round stage at the middle of the hall with a hand bazooka while THE ORAL CIGARETTES were performing at the beginning of the event. When asked about to reflect on the filming of the movie which has many action sequences, Sato said that there were many new things he experienced such as how to handle the action scenes so that they wouldn't look like meaningless battles especially since many of the characters are Ajins who will not die. As for Ayano, he joked that pushing Sato to the edge was fun for him and he liked the look on Sato's face during such scenes. However, he also commented that because they had deep trust in each other, they were then able to do the action scenes without pulling back and immerse themselves in the battle of wits as their bodies kept "resetting" in this movie.

When asked about if there was any change in their body conditions after the filming, Sato remarked that as his character was usually at the receiving end of attacks such as falling from a high spot, he found that he was always in pain. After the filming ended, he said that his neck had shrunk by 2cm which made everyone gasp. As for Ayano, he had to go through a tough diet and physical workout for as long as four months since he had to beef up as well for another movie before he filmed Ajin. The biggest change for him was that he found that he couldn't keep his arms close to his body anymore due to the increase in muscles while Sato lamented that it was tough to go on the diet with Ayano as he loves rice but couldn't eat it for 2 months.