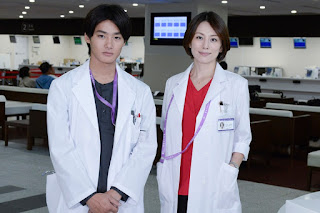 Nomura Shuhei will be appearing in the upcoming TV Asahi Autumn 2017 drama "Doctor X 5 ~ Gekai Daimon Michiko" starring Yonekura Ryoko which begins its run from 12 October in the Thursdays 9pm timeslot. He will be playing a newbie surgeon named Ito Ryoji from the yutori generation i.e. those educated under the pressure-free system who is very skillful and looks down on his peers while being unafraid to stand up to his seniors. He sees Daimon as someone who is at the same level as him despite the fact that she is much more senior and experienced than he is.

Nomura commented on his character that Ito is someone who is a bit detestable and talks in a really sarcastic manner. As such, Nomura will try his best to tap on the dark side of his character and exemplify it so as to play Ito. He also had to study a lot in order to look convincing as the very smart and knowledgeable Ito. With regard to working with his seniors, Nomura said that he's still afraid of Nishida Toshiyuki and doesn't dare to get close to the latter but he's excited about Nishida's ad-libs and will try his best to react accordingly.

As it had been 4 years since he last worked with Yonekura (their last drama together was the 2013 NTV drama "35-sai no Koukousei", Yonekura commented that Nomura had changed a lot from the last time they met because he used to be so quiet and observed his surroundings without a word but he takes the initiative to lighten the atmosphere on the set and has matured a lot. On the other hand, Nomura was worried at first whether Yonekura would remember him but was relieved and happy that she did. He also praised her for being very cool and beautiful that he went into a daze while looking at her. However, their characters in the drama can hardly be said to be on good terms despite their good relationship offscreen.