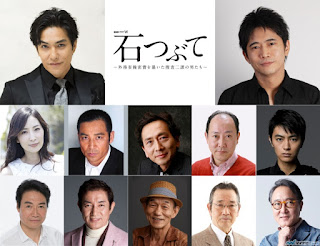 The supporting cast line-up of new WOWOW drama "Ishitsubute ~ Gaimushou kimitsuhi wo abaita sousa nika no otokotachi ~" had been announced. The drama will begin its run from 5 November in the Sundays 10pm timeslot and stars Sato Koichi and Eguchi Yosuke.

The story is based on a true case which happened in 2001 and involved the defrauding of secret funds from the Ministry of Foreign Affairs. The investigation officers faced an uphill task of venturing into the sacred territory of the country and had to fight the forces within the organisation to uncover the truth in this case caused by the "three evil men" i.e. high-ranking officers in the ministry. Sato will be playing Kizaki Mutsuhito who is involved in the investigation while his superior Saimi Teruaki will be played by Eguchi.

Kitamura Kazuki will be playing Mase Kazunori who is from the Ministry of Foreign Affairs and the target of the police investigation while Hagiwara Masato plays the chief of the second section Higashida Masayuki who supports the investigation by his officers. Mase's lover Sugitani Akane will be played by Matobu Sei and Sugata Shun will play Hasama Katsuo who is on bad terms with Kizaki and a veteran police officer. Yajima Kenichi will play Kunitomo Hisanori who is the director of the police investigation department which exerts pressure on the second section while Sano Shiro plays a top-level official in the Ministry of Foreign Affairs.

Source: My Navi News
Posted by Chiaki at 2:57 PM