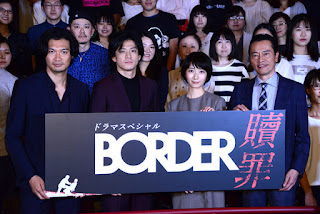 To commemorate the impending broadcast of TV Asahi drama SP "BORDER 2 Shokuzai", a premium screening event of the last episode from the first drama series in 2014 was held at TOHO Cinemas Roppongi Hills on 21 September which was attended by cast members Oguri Shun, Haru, Aoki Munetaka and Endo Kenichi. The new drama SP will be shown at 9pm on 22 October while the spin-off "BORDER Shoudou ~ Kenshikan Higa Mika ~" will be shown over two nights at 11.15pm on 6th and 13th October.

As it had been three years since the end of the drama series, Endo expressed his concern about whether they would still look the same as they did then in terms of their faces, figures and hairstyles and revealed that Oguri went through a diet back before filming the last episode then so as to project the haggard and skinny look of his character. Haru also echoed his view and commented that she was wondering if she could still fit the mini skirt which her character Higa used to wear which made everyone laugh. Oguri then said that he was not very enthusiastic about playing his character again when he heard about the sequel especially since he was so immersed into the character that it had an impact on his personal life.

Endo also commented about how Oguri had grown as an actor over the years compared to when he first worked with him in the movie "Crows Zero" and that the latter had drunk too much before when he was 19 and needed Endo to take care of him. Upon hearing this, Oguri who seemed embarrassed to be praised by Endo, revealed that he was very happy when he heard Endo's compliments at the end of the filming for the first episode of the drama series and became more confident in playing his character.

With regard to the script by Kaneshiro Kazuki, Haru said that the lines were peppered with a lot of cool words and jargon so it was difficult for them to use these words without the necessary background knowledge. On the other hand, Endo who had a lot of lines meant to explain the story, "complained" about his long lines and wondered if there could have been other words to replace the jargon whenever he stumbled on his lines.