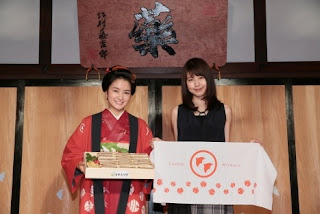 The handover ceremony for NHK morning dramas "Hiyokko" and "Warotenka" was held at NHK Osaka on 15 Sep which was attended by the current drama's heroine Arimura Kasumi and the upcoming drama's heroine Aoi Wakana. During the ceremony, the two actresses exchanged presents where Arimura presented Aoi with pork katsu sandwiches from Suzufuritei and a transistor radio as the heroine in "Hiyokko" had worked in a factory making such radios. Arimura commented that she wouldn't be telling Aoi to "work hard" since she believes that the latter is already putting in her best effort but she would still advise her to take care of herself during the long filming period. Arimura also praised Aoi for being very mature despite her young age of 19 years old and expressed her support for Aoi.

On the other hand, Aoi presented Arimura with a fan bearing the design of a bird of paradise and a hand towel. Aoi expressed her thanks to Arimura for working so hard as the lead of "Hiyokko" and also pledged to do the same with the staff and cast of "Warotenka" and smile till the end of the filming.

"Warotenka" will begin its run from 2 October.