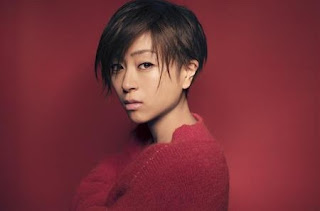 Utada Hikaru will be singing the ending theme song for new movie "Destiny Kamakura Monogatari" starring Sakai Masato and Takahata Mitsuki which will be shown in cinemas from 9 December. The theme song will be available for streaming via online portals from 8 December.

Sakai will play the role of Isshiki Masakazu who is a 35-year-old mystery novel writer living in Kamakura and likes to wear traditional Japanese clothing. He also has varied interests such as collecting railway models, plastic models and antiques, criminology research and investigation of supernatural phenomenon. Isshiki lives with his newly-married wife Akiko (Takahata) who is only 23-years-old. One day, Isshiki is approached to investigate a murder case involving a rich man which is suspected to be due to supernatural forces. At the same time, Akiko who is a newcomer to Kamakura, realises that the place is full of supernatural beings even though this is seen as perfectly normal to the locals.

The director Yamazaki Takashi approached Utada as he wanted to find an artiste who could resonate with all generations. As the movie's release date coincided with Utada's debut anniversary, she agreed to the offer readily. The song titled "Anata" was written after Utada read the original manga and movie's script and recorded this summer. Utada said that the idea for the medium-tempo ballad came from the supernatural world featured in the manga and the term "gouka" which means flames from hell and she's eager to find out how everyone feels about the song after hearing it.