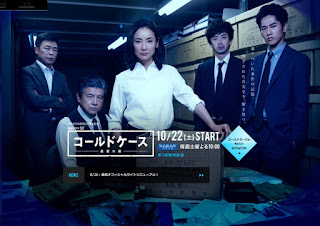 "Cold Case Shinjitsu no Tobira Season 2" will be back on WOWOW next year with its original cast of Yoshida Yo, Nagayama Kento, Takito Kenichi, Mitsuishi Ken and Miura Tomokazu while the director will still be Hatano Takafumi. The first series of the drama was shown in autumn 2016.

The drama was a Japanese remake of the hit American series which spanned 7 seasons from 2003 to 2010 and features the team of 5 police detectives from Kanagawa Prefectural Police's 1st Investigation Section who try to solve various cold cases. Yoshida who plays the only female detective in the team Ishikawa Yuri, commented that she was very happy about the sequel and had hoped that the series could continue for a long while just like the original version which went all the way to season 7. In the first season of the Japanese version, Yuri's personal episodes were depicted but there is still a lot to explore for the rest of her teammates so she hoped that these can be included in the new sequel. As for Nagayama, he said that he was a bit too stiff and thought too much during the filming of season 1 so he hoped to be able to relax and do well in the new season. Takito joked that since he has been working out a lot, he hopes to be able to flaunt his figure during a shower scene or show off his newly acquired martial arts skills in the new season since he started learning boxing recently.