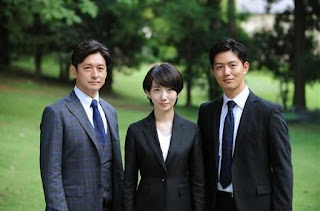 Haru will be starring in the 2-part TV Asahi drama SP "BORDER Shoudou ~ Kenshikan Higa Mika ~" (BORDER Impulse ~ Coroner Higa Mika ~) which will be shown at 11.15pm on 6th and 13th October. This will be the first spin-off SP from the drama series "BORDER" starring Oguri Shun.

The story talks about six months before Higa (Haru) became a special coroner and was still a forensic medicine assistant at Eisei University when she encountered a serial murder case that took place in a quiet residential neighbourhood. Higa behaves like a man and is always cool and collected. She clashes with the forensic medicine professor who is her teacher over the cases and tries to carve a niche for herself in this male-dominated industry with her beliefs and strong sense of justice. Co-stars include Kudo Asuka who Haru has worked with multiple times in the past and Ishimaru Kanji. Kudo plays Nakazawa Fumiaki who is a police detective struggling with the slow progress of the investigation while Ishimaru plays Asakawa Toru who is Higa's boss and a sly man out to make use of her abilities. Last but not least, Kiyohara Kaya plays a student at the junior high school where the murder victims studied at.

Scriptwriter Kaneshiro Kazuki revealed that Higa was actually supposed to be a news reporter and Ishikawa Ango's girlfriend (Oguri Shun) in his original setting but thanks to Haru's hard work in the drama series, her character had become so well-loved and significant until they could do a spin-off story for Higa. Haru commented that she was very grateful for the opportunity to playing Higa again.