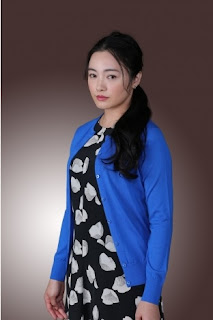 The supporting cast line-up of Kansai TV / FujiTV Autumn 2017 drama "Ashita no Yakusoku" starring Inoue Mao had been announced. It will begin its run from 17 October 2017 in the Tuesdays 9pm timeslot.

This original story features Inoue as the 29-year-old lead character Aizawa Hinata who works as a counsellor at Tsubakigaoka Senior High School and aims to be the last adult who the students can depend on other than their parents and teachers. However, while devoting herself to the pyschological care of her students who are struggling with problems in school or at home, she is troubled by her own relationship with her hysterical and emotional mother who intervenes too much into her life. Just then, Hinata gets a confession of love from a male student who had been skipping school and was being counselled by her but is shocked to find out on the following day that he died under mysterious circumstances. While trying to find out the truth behind this case, she comes face-to-face with the darkness of human beings and discovers what is most important about living and how a parent-and-child relationship should really be like.

Hinata's student Yoshioka Keigo who commits suicide, will be played by Endo Kenshin while his mother Yoshioka Makiko will be played by Nakama Yukie. Being too much in love with her son, Makiko puts too much pressure on Keigo until he starts skipping school. When Hinata comes to their house to visit Keigo, Makiko treats Hinata with distrust while Hinata can see herself in Keigo as she is also suffering from her mother's over-intervention into her life. Following Keigo's death, Makiko uses all ways possible to attack the school and Hinata so as to seek revenge. Nakama commented that she hopes to show the loneliness, love and strength which a mother has to struggle with in order to raise her child through her acting. This will be the first time that Nakama is working with Inoue.

Oikawa Mitsuhiro will be playing Kirishima Naoki who is Keigo's form teacher and helps Hinata in investigating Keigo's death while Kudo Asuka will be playing Honjou Kazuhiko who is Hinata's boyfriend and works as a salaryman struggling with his own family problems. Shirasu Jin plays Kitami Yujiro who is the form teacher of Class 2A but doesn't know how to observe his surroundings and Shinkawa Yua plays Oomiya Nao who is a part-time teacher and constantly confides in Hinata about her problems in love. Tezuka Satomi will play Naoko who is Hinata's mother and has such serious mood swings that she gets hysterical and hurts her daughter with her autocratic ways. Last but not least, Aoyagi Sho will play Kojima Shuhei who is a journalist looking into Keigo's death.