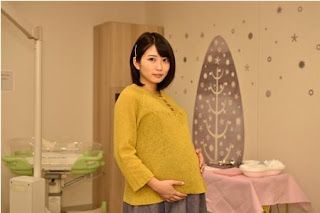 Shida Mirai will be the guest star in the first episode of upcoming TBS Autumn 2017 drama "Kounodori 2" which begins its run from 13 October in the Fridays 10pm timeslot. This is the second time she is playing a pregnant woman since the 2006 NTV drama "14-sai no Haha".

Shida's role will be Hayami Mana who was born deaf and is married to her husband Kenji (Izumisawa Yuki) who is also hearing-impaired. As such, when her parents knew about her pregnancy, they were very concerned as to whether the couple could cope with parenthood. While struggling with her insecurities and fear about becoming a mother, she is sent to where Sakura (Ayano Go) works at when she suddenly goes into labour.

In order to prepare for the role, Shida spoke to a woman who is hearing-impaired and had given birth before where she realised that the latter didn't find that being deaf was a hindrance to her life. As such, Shida tried to avoid projecting the feel that being deaf was a negative thing to her character. With regard to her previous attempt at playing a mother, Shida recounted that she was only 13 when she took on her first leading role in a drama and had to play someone who had gone through something which she hadn't experienced before. Back then, she spoke to her mother and the people around her who had given birth before and this time, she also had to rely on her imagination to portray her role. 11 years ago, she was advised about her unnatural hand and walking movements while having a cushion stuffed beneath here clothes but this time, she managed to move around more naturally as if the cushion was part of her body. As some of her friends are already mothers, Shida felt that it was timely for her to start thinking about the importance and weight of life as she acted in this drama.