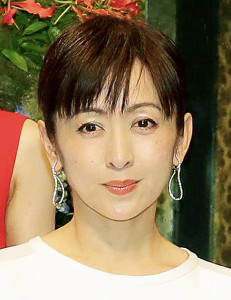 Saito Yuki finally admitted through a fax statement sent to the media on 11 September that she had been having an affair with her doctor despite earlier denials through statements and a press conference. The two of them are said to have already ended their affair when news of it first came to light. (For my earlier report on this, please go to here.) Saito's admission was believed to be in response to her doctor going on TV earlier on the same day to talk about the affair.

Saito said in her statement that she had come to rely too much on her ex-lover as an actress and woman and stressed that the relationship had already ended. She apologised to him and his family for the hurt that she had caused to them. Saito also said that she couldn't speak the truth in public and during the press conference she held as she was fearful of her children seeing it.

In relation to her affair reports, there had been requests made to expel her and her husband from the Mormonism church in her neighbourhood as the religion has strict rules banning sexual relationships with any member of the opposite sex other than your spouse. Even though the church does not seem to be going to expel her, Saito hinted at the possibility of leaving on her own as she didn't think it was good for her to take advantage of the church's kindness. As for the impact on her career, Saito commented that she was prepared for whatever penalties that may come as a result of her actions. At the moment, Saito's CM for Emi-net's "Tenshi no rara" was taken off the company's website from 7 September and her colleague from the same agency Hano Aki has taken over as the new CM personality. Other CM deals and work arrangements are currently being reviewed such as her nomination as the promotion ambassador for Kanagawa Prefecture's sign language campaign in May 2017 and her radio show on Nippon Housou. She is expected to continue with her appearance in the NHK Taiga drama "Segodon" which will be shown next year.

Saito's ex-lover i.e. her family doctor appeared on NTV's morning programme "Sukkiri!!" to talk about their 5-year-long affair. The interview was said to have been filmed on 10 September where the doctor talked about being a longtime fan of Saito since she was a teen idol and how they met 7 years ago as doctor and patient. Their affair was said to have lasted for 5 years until they were caught by the tabloids. The doctor spoke of how he would have loved to continue protecting Saito but couldn't do it anymore which suggested that he still had lingering feelings for her.

What a single affair can do to a career. Hope Saito and all affected pull through.