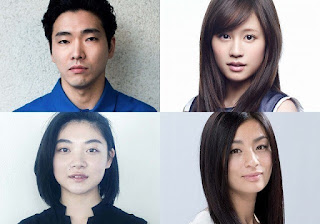 Emoto Tasuku will be starring in the new movie "Suteki na Dynamite Scandal" (The splendid dynamite scandal) directed by Tominaga Masanori and based on the same-titled essay by Suei Akira. The movie will be shown in cinemas in March 2018. Co-stars include Maeda Atsuko, Miura Touko and Ono Machiko.

The story is based on the essay compilation about the life of Suei Akira who is a writer and had been the chief editor of publishing house Byakuya Shobou. It will describe the turbulent and eventful life of Suei to date such as how his birth mother committed suicide when he was a child after an extramarital affair with the son from their neighbours' family, his resignation from the factory he worked at after senior high school and moving to Tokyo as well as how he set up the legendary erotic magazines "Weekend Super" and "Shashin Jidai" with photographer Araki Nobuyoshi in the 1980s.

Maeda will play Suei's innocent and naive wife Makiko while Miura plays Suei's lover Fueko. As for Ono, she will be playing Suei's mother Tomiko. Emoto commented that he was surprised and honoured by this star-studded lineup of actresses playing women linked to him. He revealed that most of his filming was with Maeda and Miura since Ono's character was supposed to have "exploded" in a dynamic manner.

Maeda commented on her character as someone who is very accommodating towards her cheating husband and only just complains verbally when she finds out about the affair. As such, she thought that Makiko is actually a very wonderful woman who has strong self-confidence in herself and is very independent. As for working with Emoto, she said that since Emoto is her senior in acting, she admired him for his ability to fit into his character very easily and that he is a perfect fit for the role.

As for Miura, she said that as the filming progressed, there were many ideas which came up so her character was evolving at the same time. She described Fueko as someone who has a tough life but has a lot of charm which she hopes that her acting could convey this.

Last but not least, Ono described her character as a mother who seemed unlikely to have existed in real life so she was worried when she read the script as she found the story to be quite unbelievable. However, she is confident that the viewers will be able to accept her way of portraying this character after watching this movie and be convinced that such a person did exist in Suei's real life.