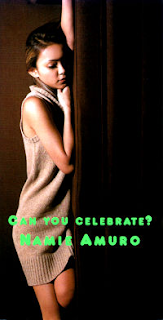 Following the surprise announcement from Amuro Namie about her impending retirement next year, it was expected to see so many news articles about this since last night. Honestly, even after a night, the impact of this piece of news hasn't quite sunk in for me. A retirement is so "final", taking a hiatus or indefinite break would have softened the blow a little. The sole consolation is that she has announced this a year in advance so that fans can prepare for the inevitable well ahead rather than a surprise announcement like what some actors and actresses had done earlier this year.

Nikkansports listed her top 10 bestselling singles and most of them were from the 90s thus reflecting how influential and popular she was during that era. To me, Amuro was one of the first few Japanese singers I listened to when I started getting into Jpop. SPEED is long gone, SMAP has disbanded and now Amuro is going to retire. This is a stark reminder of how much time has gone by since then and the end of the 90s golden era for Jpop.

Much as it is a pity that I may never get to see her live at a concert and she probably won't be releasing any more songs after her retirement, considering how long she has worked and that it's probably high time for her to start a new life now that her son is already in university, I have nothing but the best wishes for her that she will be happy after she sheds her role as a top singer.

Here is the top 10 list of bestselling singles with their release dates. Numbers in brackets indicate the number of units sold.

This song list brings back so many memories for me ~

I think she knows when best to retire. It's better to retire when you are still admired and very much liked, than keep going till your music quality starts going downhill(eg Ayumi Hamazaki). Rather than act desperate to hold to your stardom, it's better to seek other things in life which one has missed during earlier days... My wishes are with Namie, hope she returns in some form either as a music producer or in any other capacity contributing towards music industry...

Can You Celebrate is one of the few Namie songs I know and it's lovely. I generally prefer her over Ayumi, so this news is a bit sad. But Namie has had a great run and she's going out on a high, so that's some consolation. Hopefully she'll still sing the occasional drama theme song.