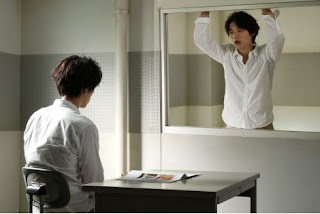 NTV Summer 2017 drama "Aishitetatte, Himitsu wa aru" starring Fukushi Souta which ended its run on 17 September, will have its real ending shown exclusively on Hulu in two installments. Part 1 is already available for viewing while Part 2 will be released for viewing from 24 September.

The ending titled "Boku wa dare da?" (Who am I?) will continue from the drama's last episode shown on TV where Rei (Fukushi) is found to be suffering from dissociative identity disorder and has two characters within him i.e. Rei and Saku. The new story will describe the conversations he has with his inner self after he turns himself in for the murder of his father and the outcome of his relationship with his girlfriend Sawa (Kawaguchi Haruna).

Fukushi commented that the new ending offered a very different challenge for him as he had to speak 30 pages of lines all on his own during the conversation between Rei and Saku. However, it was worthwhile doing it especially as Rei and Saku finally come face to face with each other. As such, he hoped that everyone will be able to watch this new story to see how the drama finally ends.

I just recently got into this drama and just saw the ending of episode 10. I was wondering is there any way to see this eng sub?

Thank you for your post. I couldn't find evidence of this special anywhere, even though I'm sure it was advertised at the end of episode 10. I'm looking forward to seeing it.

How can I watch Boku wa dare da ?