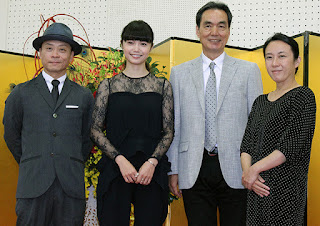 The screening event and press conference of new NHK drama SP "Kurara Hokusai no Musume" was held at the TV station's Tokyo HQ on 12 September which was attended by the scriptwriter Oomori Mika and cast members Miyazaki Aoi, Nagatsuka Kyozo and Miyake Hiroki. The drama SP will be shown at 7.30pm on 18 September.

The drama SP is based on the novel "Kurara" by Naoki Award-winning writer Asai Makate where Miyazaki will be playing the third daughter O-ei (later known as Katsushika Oi) of famous Edo-era painter Katsushika Hokusai who will be played by Nagatsuka. This will be the first time in 9 years that Nagatsuka and Miyazaki are playing father and daughter since the 2008 NHK Taiga drama "Atsuhime". O-ei's confidante and Hokusai's student Zenjiro (later known as Keisai Eisen) will be played by Matsuda Ryuhei. Co-stars also include Miyake Hiroki, Yo Kimiko and Noda Hideki.

Oi was the daughter of Hokusai's second wife and was married to artist Minamisawa Tomei who she found to be poor at his craft and she mocked him for this. As a result, she was divorced by Tomei and returned to Hokusai's home where she assisted him in his artwork and produced her own works as well. During this period, she confided in Zenjiro about her worries and troubles such as returning home divorced, how she found it difficult to outshine her father who was such a talented artist and her obsession with colours. After Hokusai's death, Oi who was in her 60s then, had nothing left but the paint brushes left behind by her father.

Miyazaki commented that it was a refreshing experience for her to play O-ei especially since she was a headstrong woman in the Edo era and she had never spoken or wore clothes like these before. It was a happy one month for her as everyone worked hard towards the goal of making a good drama and she could enjoy acting in the process. As she did not know about O-ei prior to acting in this drama, Miyazaki revealed that she started learning painting bamboos but it was really difficult because it required delicate movements of the brush to prevent the colours from smudging. As such, she felt that she could understand O-ei's frustrations somehow as the latter tried hard to outshine her father who was extremely talented. As for having to put on special make-up to play the elderly O-ei, she said that she had already tried this kind of make-up more than 10 years before. Miyazaki revealed that she met her grandfather a few days before the filming and realised that the wrinkles on his face and hands and texture of his skin was a reflection of his history just like O-ei so she hopes to be able to age like that as well.