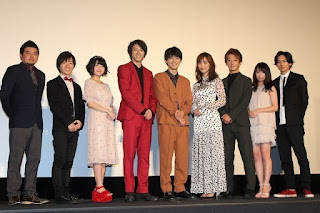 The first-day-screening event of new movie "Tomodachi Game Gekijouban FINAL" was held at United Cinema Toyosu on 2 September which was attended by the director Nagae Jiro and cast members Yoshizawa Ryo, Uchida Rio, Yamada Yuki, Okura Shimon, Nemoto Nagi, Ueno Yuka, Uragami Seishuu and Kubota Yuki. This marks the end of the "Tomodachi Game" series which consisted of another movie and a drama series.

When asked about his favourite scene, Yoshizawa said that there were two i.e. the scene when Yuichi beat up Silk Road which showed the worst of him and the scene when his face was licked by Maria played by Ueno. He recalled that he was quite scared before the licking scene and tried to discuss with the director about changing it. However, Ueno was nonchalant about having to do the scene so they went ahead with it as planned when the director said that they should do it.

At the end of the event, Yamada revealed that he was honoured about Yoshizawa asking for him to play the role of Mikasa Tenji when the movie was in the planning stage. Through the filming of this movie, the two of them had become more than just fellow actors and got along well so he was very glad to be able to support Yoshizawa in this movie.

It was also announced during the event that the Blu-Ray and DVD version of the previous movie "Tomodachi Game Gekijouban" will be released on 23 August.