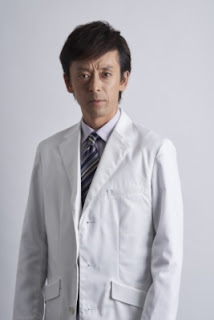 Takito Kenichi will be making a special appearance in the TV Asahi spin-off drama "Doctor Y 2 ~ Gekai Kaji Hideki ~" starring Katsumura Masanobu which begins its run from 26 September and is also shown on au Video Pass, Amazon Prime Video and TV Asahi Douga. He will be playing his role from "Doctor X" i.e. Kitano Tooru who used to be looked down as he was an average student despite graduating from the prestigious Toutei University. He left for the US and became a well-known surgeon through his sheer hard work and returned to Toutei University Hospital. However, he was disappointed with the low standards of the professors in the university hospital and went to Shanghai after he was headhunted by an elite international medical group at the end of "Doctor X 4". He is careful and detailed when doing operations but likes to speak weird English for no reason at times.

"Doctor Y" features Kaji who loves to be part of the herd, adores money, uses his skills to get what he wants and is narrow-minded. Last year, when the first spin-off series was shown via the Internet and later shown on TV, it showed how Kaji was sent to a hospital in the countryside and was bewitched and tempted by money when treating his patients but he always managed to achieve his aims in line with the main drama's theme of "never failing". In the second series, he will be at Honokura Hospital which is surrounded by mountains and feels like a place which you would see in horror movies. There is a legend that the hospital is cursed by the spirit of a young girl. From the first night when Kaji reports for work, he goes through a harrowing and comical experience while continuing his stint as a surgeon there.

Takito commented jokingly that he was a bit disappointed that the offer was to appear in "Doctor Y" instead of "Doctor X" but said that he was still motivated and excited after all to be able to participate in this. He also suggested that the story would show the unexpected relationship between Kaji and Kitano and unknown sides in Kitano which had never been featured before.