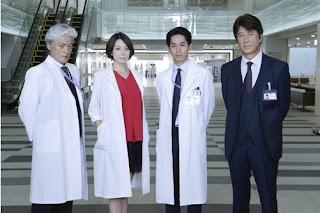 Nagayama Kento, Jinnai Takanori and Kusakari Masao will be appearing in the upcoming TV Asahi Autumn 2017 drama "Doctor X 5 ~ Gekai Daimon Michiko ~" which stars Yonekura Ryoko and will begin its run from 12 October in the Thursdays 9pm timeslot.

Kusakari will be playing Uchikanda Kagenobu who is the chairman of the Japanese Doctors Club and schemes to restore the old system of power being gathered by the top management in Totei University Hospital. Even Hiruma Shigekatsu (Nishida Toshiyuki) is scared of Uchikanda who will be clashing with Daimon (Yonekura) who has totally different ideals.

As for Nagayama, he will be playing a newbie doctor Nishiyama Naoyuki who seems disinterested and wants to stay out of conflict as much as possible unlike Daimon but is secretly impressed with her surgical skills. Last but not least, Jinnai will play the vice director of Totei's surgical department Inomata Takashi who is shrewd and cunning thus allowing him to survive in the competitive world of surgeons in the hospital.