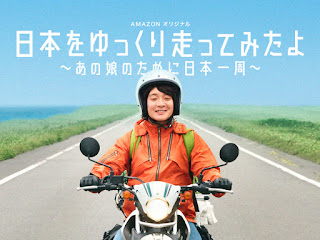 Hamada Gaku will be starring in the new Amazon Prime Video drama series "Nihon wo yukkuri hashittemita yo ~ Ano ko no tame ni nihon isshu ~" (I went around Japan slowly ~ touring around Japan once for the sake of that girl ~) which consists of 14 episodes and will begin its run from 20 October where the first two episodes will be streamed. Subsequent episodes will be uploaded every Friday.

The drama which is based on the true story manga "Nihon wo yukkuri hashittemita yo" by Yoshimoto Koji, features Hamada as Yoshimoto himself who resolves to become a strong man in order to confess his feelings to the woman he loves. As such, he stops his work temporarily and goes on a tour around Japan on his motorbike. The heroine Eri will be played by Motokariya Yuika. Co-stars include Yamazaki Hirona, Iio Kazuki, Kaname Jun, YOU and Muroi Shigeru.

Hamada commented that this drama will be a road movie-style comedy which everyone has never seen before so he's anxious and happy about the drama being about to be released. He also expressed his thanks to the wonderful cast and staff members who went around Japan with him and that if it wasn't for Amazon, they might not be able to make such a drama of this scale.